It is said that upon seeking sacred knowledge, a person will face the greatest obstacles as Satan aims to divert the person from seeking the path to his Lord.
.
This has certainly been the case in my experience of Cairo so far. Never have I faced such a rollercoaster of emotions during such as short period of time, having to deal with the stresses of finding a flat, leaving my family and friends and adjusting to this new environment. But Allah (swt) says in the Qur’an;

And those who strive for Us – We will surely guide them to Our ways. And indeed, Allah is with the doers of good. (Al-Ankabut 29:69)
There have been different moments over the past week where I have felt the highs and the lows of studying abroad. At each of these points, I wrote and thought about different posts to blog about but never got round to publishing them. Instead, I have collated these different posts and posted them below under one big blog in chronological order. This will help give a sense of perspective of the journey I have been through so far:
Farewell
The departure lounge; the most diverse part of any country, rich in human races, religions, emotions and languages. From those looking forward to a nice trip abroad to the others bidding their loved ones goodbyes, you are sure to find a whole mixture of the lot, alongside a nice chunk of materialism too! 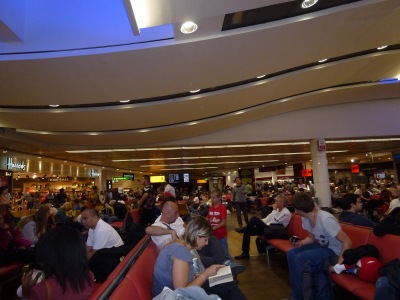 The Departure Lounge as I wait for the Plane
So I guess for me this is where the journey starts as I sit here waiting for my (delayed) flight to Egypt. For something I have dreamed of for so long, I cant help think that the initial taste seems so bitter. With the prospect of 7 months of complete dedication to education and soul searching, all I seem to be able to think of now is the people I am leaving behind. 7 months seems so long…
To be honest, the magnitude of what I am doing never really hit me until the moment I kissed my mother farewell for the last time in months. I was so caught up in my dream of of what I was about to pursue that I scarcely stopped to think of what I’m actually leaving behind. But seeing my mother’s tears as I left the door is something that is shook me hard.
But that’s what makes parents so amazing. In that moment of misery, just as I began to rethink what I was going to do, my father reminds me of the Hadith of our beloved messenger ﷺ; “whoever sets out on a path of knowledge, Allah will make easy for him the path to paradise”[1] then with a gentle reminder; ‘what knowledge can come except through struggle’.
So I guess here is where that struggle starts and the path begins. May the path be made easy and the difficulties a means for learning. Ameen.
For Every illness is a cure
In truth, had I been writing this blog just 5 hours ago, it would have taken a very different tone. Never have I been through so many tests and trials as the one this week, so many frustrations and elations all in the space of a week.
But it’s amazing how a few moments can turn the sourest day into the sweetest one as all those troubles you went through suddenly become worth it for that moment. The Prophet ﷺtaught us, “Allah has not sent down an illness without sending down a cure for it.”[2] Rarely have I known something to be so true!
The past week has been a struggle as settling in has proven much harder than I envisaged – home sickness at its worst! The first symptoms manifested at the hotel I was due to stay in. Having barely slept on my overnight flight, I arrived at 6am to the overbooked hotel I had booked into for that evening and told there were no available room until later that afternoon. When I returned later, the hotel staff informed that my room had been flooded and no other room was available. Next was finding a flat; a task which proved a lot harder than I thought! Still recovering from its recent revolution, many of the foreign students in Egypt left as affairs became unstable and many are yet to return making finding a flatmate would be very difficult. This obviously changes the whole plan as renting a flat on your own is a lot more expensive than anything I had budgeted for. All this was accompanied by a complete unfamiliarity of the country, a constant chance of being ripped off, a massive change of climate and terrible homesickness. This wasn’t the knowledge seeking experience I was expecting!

Al-Azhar Mosque just before Mughrib, the sunset Prayer
But as mentioned before, to every illness is a cure! One by one each of these problems solved itself in a way far better than I imagined. I was upgraded to a bigger hotel room (after some complaining and an attempt to switch me to a different hotel), given the keys to a wonderful family friends flat to stay in till I was settled and met a wonderful bunch of people who have helped me out tremendously in my time here in Cairo.
However, all that seems like nothing compared to what I was blessed with this evening. Like honey, it takes a long struggle and hard work before you can taste something sweet and beneficial. This medicine was a cure to all my ailments as I was reminded of exactly that which I came to seek – the knowledge blessing of the scholars.
Cairo has a long history of great scholars and people in its city. It is difficult to understand what effect these people have on a nation until you have the blessing to sit in their companionship and watch how they interact. Today I was invited to the house of the scholar I am due to be taking classes with during my stay here. Despite having never met before, we met as if we had long known each other as he treated me with the utmost respect and hospitality. As I arrived in my taxi, he stood on the side of the road waiting to pay the driver before I could, turning to me with a wide embrace and gentle smile saying “welcome oh Sheikh Talha”. He then led me to his home stating how happy he was that I had come and offering his complete service for anything I wished during my stay here. As I entered, I was presented with a whole host of different foods and drinks as we sat and discussed a syllabus which I would take with him of the course of my stay in the city. Even as I was leaving, he turned to his book shelf and pulled out a present which he wished to give to me upon our first meeting. He then accompanied me all the way to the bus stop and ensured I could get home safely before returning to his home.

A group of brothers sitting inside Al-Azhar
It’s hard to describe the effect that all has upon you. Here I was, a complete stranger being welcomed as a long lost brother and treated as though it was me doing him a service. This behaviour wasn’t exclusive to the scholars. It was as true when I was trusted with keys to a flat to stay there as long as I liked and treated to a wonderful meal at one of Cairo’s finest restaurants by someone I just met. It was true when I met a friend of a friend through Facebook, treating me as his closest companion (yes – we did have a game of Fifa!) and driving me around the city to help me get whatever I needed. It was true when a distant family member met me as though I was his own brother, helping me find the flat I now stay in and constantly calling to check if I need anything. Such magnanimity and good character is sadly so scarce in the west and is dying even amongst Muslims, but when it is found it has a long lasting impact on your soul…
“Allah has not sent down an illness without sending down a cure for it.”[3]
Reliance upon Allah
The greatest lesson for me so far has been that of trust. I remember speaking to a friend when I first arrived expressing how difficult things were getting. Their words were simply “Have trust – Allah does not despair those he loves.”
Since then, I have learnt how wise these words are. For anyone seeking to do something for the sake of God, do not despair when things go wrong as verily that is simply a test to see how sincere you are.
لا تيأسن فإن اليأس كفر
Do not despair for verily it is denial
إن مولاك عزيز غفور
Verily your guardian is victorious, forgiving
Alhamdulillah, God has blessed Cairo to be a daily reminder of trust and reliance upon the creator through means of its driving. As I describe to my Egyptian friend, to cross a road here, you walk and pray the cars pay attention to you!
So to finish this blog on a lighter note, heres a video I took whilst heading to pray mughrib in the mosque. It was on one of the busiest roads in Cairo and this was literally the only way to get to the mosque! Here it goes:
[1] Narrated by Imam Muslim
[2] Bukhari, Hadith 5354, Chapter 79; The Book of Medicine.
[3] Bukhari, Hadith 5354, Chapter 79; The Book of Medicine.