I will never forget that moment.

It had been around 3 months since I had first arrived in Cairo. It had been my dream to take time out to study Islam and this was finally the opportunity to do just that. I had always wanted to tread the footsteps of the great men who came before me. I yearned to be closer to Allah, and the only way to do so seemed to be tread the path for sacred knowledge; the sacred path to Allah.

So it was incredibly discomforting when after 3 months of intensive study I was felt more constricted and, surprisingly, more spiritually low than I had ever been before. I couldn’t understand it; wasn’t this what coming closer to Allah was meant to be? How else could I come closer to Him if it wasn’t through learning sacred knowledge? Feeling constrained was incredibly difficult, but what was harder was not knowing what to do about it. But it is in these moments of difficulty that openings come.

A few days before Eid Al-Adha I receive a random call from him informing me that he will be in Cairo in a week and would he be able to stay at my place. I had long been used to him staying over at my place in London, but this felt incredibly discomforting. I was here to study and didn’t want distractions. Taking a week out of my 7 month stay was too long. But Allah had planned something different. Having lived in the West all my life, I didnt realise that Eid Al-Adha was an official holiday in Egypt and all teaching would stop for that period. Whether I liked it or not, I had to take time off, and Bilal’s charm won me over.

So he arrived the night before Eid and we began our adventures around Cairo. We made the obligatory visit to Halal KFC, visited some other friends in Cairo and met many new ones, but the whole time I was not my usual self. The constrained feeling I had built up was hard to shake off and taking time out of studying wasn’t helping. It was as if a wall had built around my heart which I could not penetrate. As we planned our week ahead I was told by a dear friend Sayyidi Samer Dajani that there would be a procession on the second day of Eid to visit the graves of each of the Awliyaa (Saints) of Cairo beginning in the mosque of Sayyidah Zainab, the great grand daughter of the prophet ﷺ. Seeing this as a great opportunity to see Cairo, we happily agreed and arranged to be there for 7am the next day.

Being the second day of Eid, I didn’t expect more than 15 people to be there as I assumed everyone would be spending the time with their families. Egyptian culture is notorious for its late night sahrahs in the coffee houses, and Eid was the perfect excuse to do just that. Everyone must be sleeping in by now and I began to regret my decision for such an early morning excursion. But what was most difficult was the realisation that I had missed Eid with my own family. Seeing everyone celebrating made me feel incredibly home sick. I had never been so far away from them on the day of Eid. As my thoughts preoccupied me, the cab rolled up to the mosque. We paid the driver and made our way over to the entrance…

How Sublime is He Who gave you,
Who made you masters over all people,
O my masters, far be it from you-
To leave those who love you!

The chorus hit me like a wall; my heart shattered. The entire mosque resonated in the praise of Allah and his Messenger ﷺ. If I was looking for an answer, here it was singing to me in unison: Love.

Love is the most powerful drive for any action. What you can teach through love cannot be taught with a thousand lashes. Endless warnings of climate change are heard every day, but it takes the love of a David Attenborough documentary to really move people about it. Love motivates and moves the very essence of a human being. Lovers remember. Lovers seek. Lovers yearn. In my vigor to study I had neglected the most crucial ingredient of all. I had forgotten that none of it is to any avail if love of Allah does not manifest in your heart, and in order to manifest, it must remember.

The Day when there will not benefit [anyone] wealth or children

But only one who comes to Allah with a sound heart.”

Hundreds of people, young and old, gathered and marched on foot around the city of Cairo. Sayyidi Samer was kind enough to explain the significance of each place we visited in English and show us the correct adab (manners) in each of the gatherings. I met people whose faces radiated with light and voices rung with praises of Allah and His Messenger ﷺ. I will never forget that gathering. 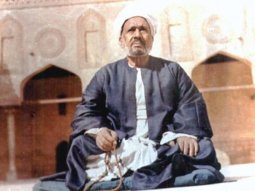 The beginning: inside the mosque of sayyidah Zainab, descendant of the prophet ﷺ. 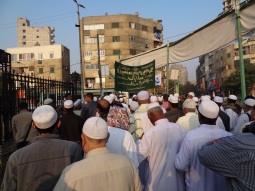 Our journey begins: as we exit the mosque, the processing walks to our next stop

Young and old would make the march through the city streets.

…we walked through the streets of Cairo 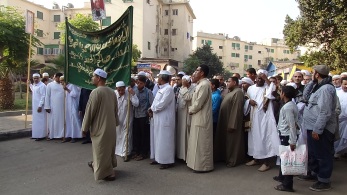 …with regular breaks to regather the troops

… and weaved through the alleys of the old city

To visit and pray for the saints who came before us. Here is the grave of the great scholar Ibn Hajar Al-Asqalani 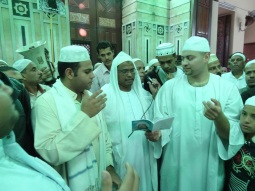 As we moved from from place to place, we sung songs of praise for the Creator and his beloved ﷺ. These were the men who led the singing 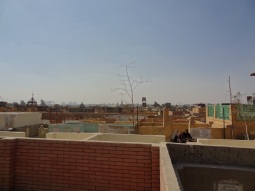 The city of the dead: the main burial area in Cairo. Many of the poor live amongst the graves as they are unable to afford a home of their own 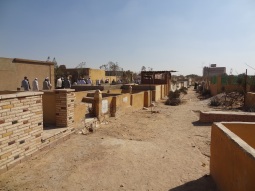 Amongst the graves of the dead city

The grave and teaching place of Imam Al-Shafi’. The pillar you see if where he would lean against whilst teaching his students

And, as was often the case for our Imams, some of their greatest teachers were women. This is the mosque and burial place of Sayyidah Nafeesa, descendant of the prophet ﷺ. Upon the death of her student Imam Shafi’, she was asked what she thought of him. “He used to perfect his wudu”, she replied

The Prayer area of Sayyidah Nafeesa. She would come here for seclusion to worship Allah.

Here lie the students of Imam Malik, peace be upon them all

Ofcourse, there were regular tea breaks

And they hosted us with a feast for lunch!

where the songs of praise rung inside

One of the men holding Bukhoor, a sweet fragrance, in a gathering at Ibn Ata’ Illah As-Sakandari’s Mosque

The Grave of Al-‘Iz ibn Abd As-Salaam, a man described at the Sultan of Scholars for his strong stance against oppression.

The Grave of Abdullah ibn Abi Jamrah. We visited this as part of the Ja’fari march on the second day of Eid

The brothers offer a prayer for the soul of the great scholar; a man whose story is a real example for Muslims today!

One of the other gatherings inside the mosque of Sayyidah Zaynab which followed the one we sat in. Here they sung beautiful nasheeds (songs) in praise of God and his Messenger ﷺ

7 thoughts on “The Shattering”