“They are meticulous in keeping with the sunnah, yet forget the One who brought it ﷺ!”
It was a powerful moment. We had just finished praying maghrib and began reading the adhkar after the prayer, most notably the Salawat on the Prophet ﷺ. As we finished, the shaykh turned his attention to a poster on the wall which listed all the sunnah duas. On it, they listed every supplication from the Quran and Sunnah, but nowhere had they mentioned Salawat on the Prophet ﷺ.
What the Shaykh described was an endemic problem in our community; our obsession with keeping to the letter of the law and forgetting the spirit of it. Religion has become a series of “challenges and hurdles” rather than something we live and feel. Imagine doing the same with your parents; abiding by everything they say but never showing gratitude. If we can see the irony of it there, how could we do it with our beloved Messenger ﷺ.
Many of us subconsciously view our Prophet ﷺ as just a historical figure; someone who simply delivered a message to us. Few truly grasp the role He had, has and will have in our lives. Few people truly experience His reality, realising that every Salawat you sent is received and replied to by Him ﷺ as mentioned in the Hadith. Few love Him ﷺ more than our family, money, children, let alone ourselves, even though that is the essence of faith. If we did, we wouldn’t need to be told what is “sunnah” to say after each prayer; it would flow naturally and unceasingly from the heart as it is meant to. We are vigilant about abiding by His sunnah because we completely neglect His love.
The reality for most of us is that we are not at the stage where salawat flows through our veins and bones. We need reminders to help us engender it, as salawat itself is the remedy to the problem. This is the reason we tell people to do it after each prayer; to build a habit within the person. And whilst it may not be stated in a hadith that you know to do it at this specific time, it is explicitly stated that we should do it all the time. When you reach that stage, you don’t have to do it after the prayer as you will be doing it anyway. Until then, use the prayer as a useful schedule to build that routine. This is not a bid’ah, it is just being organised.
As the shaykh told me “Let it pour into your heart every time you say it. Let it do the work”. You will witness its transformative powers.
The Prophet ﷺ described that the pinnacle of faith as good character – doing the right thing in the right way. By following the sunnah we do the right thing, but by neglecting His love, we do it all the wrong way. 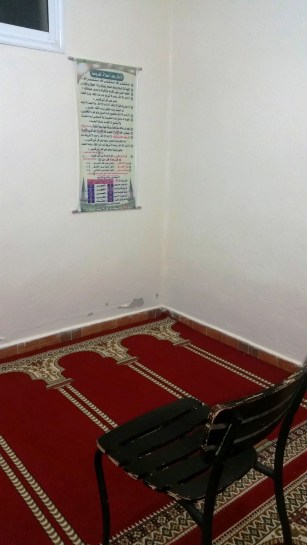 The prayer room in Morocco

A similar poster to that hung on the wall